British security company G4S, the world’s largest, has responded to a four-year long global BDS campaign protesting its role in Israeli violations of Palestinian human rights by announcing yesterday it will sell its Israeli subsidiary in the coming “12 to 24 months.”

In describing the move, The Financial Times reported that G4S was “extracting itself from reputationally damaging work.”

Since 2010, G4S has lost contracts worth millions of dollars in many countries following BDS pressure to end its complicity in Israeli prisons, where Palestinians are tortured and held without trial, as well as in Israeli checkpoints, settlements and a police training center. Their lost clients include private businesses, universities, trade unions, and UN bodies.

The Bill Gates Foundation in 2014 divested its $170m stake in the company following protests at its offices in Seattle, London and Johannesburg.

In recent weeks, UNICEF in Jordan and a major restaurant chain in Colombia became the latest high-profile bodies to end their contracts with G4S following BDS campaigns.

“As at the height of the international boycott of apartheid South Africa, BDS pressure is making some of the world’s largest corporations realize that profiting from Israeli apartheid and colonialism is bad for business,” said Mahmoud Nawajaa, a spokesperson for the Palestinian BDS National Committee, the broadest coalition in Palestinian society that leads the BDS movement.

“Investment fund managers are increasingly recognizing that their fiduciary responsibility obliges them to divest from Israeli banks and companies that are implicated in Israel’s serious human rights violations, such as G4S and HP, because of the high risk entailed. We are starting to notice a domino effect,” he added.

French multinationals Veolia and Orange and CRH, Ireland’s biggest company, have all exited the Israeli market in recent months, mainly as a result of BDS campaigning.

In January, the United Methodist Church put five Israeli banks from Israel on a “blacklist” due to their complicity in human rights violations, including the financing of illegal Israeli settlements.

“This latest news from G4S is welcome but it has no immediate effect on those facing serious human rights violations inside Israel’s prisons today.”

“At a time when Israel is stepping up its campaign of mass incarceration as a way of repressing Palestinian society, G4S should immediately end its role in the notorious Israeli prison system, as well as its involvement in securing Israeli checkpoints and illegal settlements.”

“We are grateful to all of the dedicated grassroots organizers around the world who are working in solidarity with Palestinians seeking freedom, justice, and equality. But G4S is infamous for breaking pledges to end its participation in Israel’s crimes.”

“Our boycott of G4S will remain among the BDS movement’s top priorities until we actually see its back out of the door of Israel’s regime of occupation, settler-colonialism and apartheid.”

“We also welcome the news that G4S is also selling its businesses that operate youth detention centers in the US and the UK, both of which have seen G4S targeted by campaigners over its abusive practices and both of which are part of deeply racist incarceration systems.”

“From the US to Palestine, from South Africa to the UK, G4S is deeply involved in racist mass incarceration business. We remain determined to work closely with partners to hold G4S to account for its participation in human rights abuses.”

G4S also has a long and documented track record of participation in human rights and workers’ rights abuses elsewhere in the world, especially in prisons and migrant detention centres it has run in the US, the UK and South Africa.

“Failing to stop the impressive growth of BDS in pursuit of freedom and justice, Israel is desperately trying to smear and delegitimize our nonviolent movement, including with anti-democratic laws in Europe and the US aimed at silencing dissent and suppressing our freedom of speech.”

“We believe strongly that our ethical approach and just cause will prevail, as this latest G4S announcement shows.”

In September 2015, French corporate giant Veolia sold off all of its businesses in Israel. This was a direct result of a 7-year campaign against its role in infrastructure projects for illegal Israeli settlements that cost it more than $20 billion in lost tenders and contracts.

A leading France-based Israeli businessman recently told the Israeli media that the growing strength of the BDS movement means that most major European companies now avoid investing in Israel.

Foreign direct investment in Israel dropped by 46% in 2014 as compared to 2013, according to a UN report, partially due to the impressive growth of the BDS impact, as stated by one of the report’s authors.

G4S announced in 2013 that it would end its role in illegal Israeli settlements, checkpoints and one Israeli prison by 2015 but did not implement the withdrawal. In 2014, G4S announced it “did not intend to renew” its contract with the Israeli Prison Service when it expired in 2017 but is yet to implement that decision.

April 2015 – More than 20 businesses in South Africa terminate their contracts with G4S, costing the company more than $500,000.

November 2014 – The municipality of Durham County in North Carolina, USA, ends its contract with G4S following a campaign by local Jewish Voice for Peace activists.

May 2014 – The Bill Gates Foundation sells the entirety of its $170m stake in G4S following an international campaign involving a petition launched by 100 organisations from across the world and demonstrations at the Gates Foundation’s Johannesburg, London and Seattle offices. The​ US​ United Methodist Church divests all G4S shares from its $20bn investment fund.

January 2014 – The student union at the University of Kent in the southeast of England votes to terminate its contract with G4S following an “outcry” over its role in human rights abuses in Palestine. Student unions across the UK later vote to take similar steps. King’s College London and Southampton universities later decided not to renew contracts with G4S following student pressure.

December 2012 – As a result of a vibrant student campaign, the University of Oslo announces that it will terminate its contract with G4S, stating it does not want to “support companies that operate in an ethical grey area”. Universities in Bergen, Norway and Helsinki, Finland later announce similar steps.

April 2012 – On the eve of a historic hunger strike by more than 2,000 Palestinian political prisoners, 13 Palestinian prisoner and human rights organisations call for a campaign to hold G4S accountable for the role it plays in maintaining Israel’s prison system, where torture prevails. 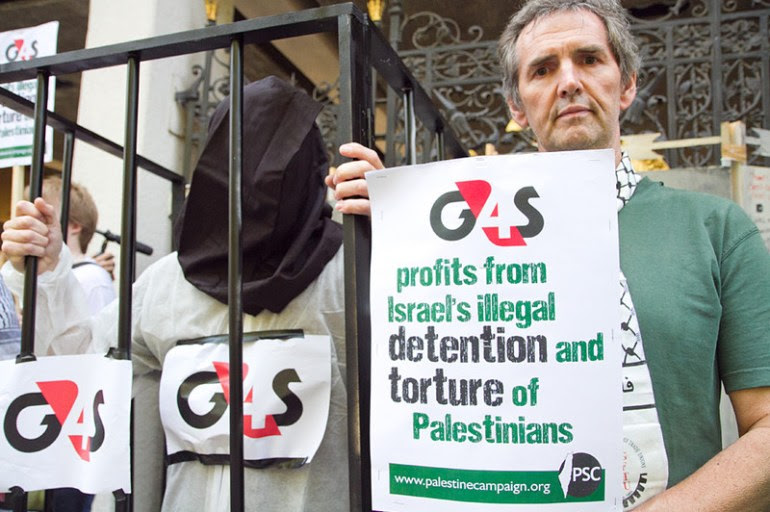 G4S, the British-Danish security conglomerate, announced on Thursday morning that it will sell its Israeli subsidiary, responsible for providing security equipment, control rooms, and surveillance devices for Israeli prisons, checkpoints, police training centers and military compounds that play a critical role in the imprisonment, oppression and colonization of Palestine and Palestinians. The announcement is a clear recognition of the growing strength and power of the international BDS (boycott, divestment, sanctions) movement targeting G4S in response to calls from Palestinian prisoners and civil society organizations.
This announcement comes following the loss of millions of dollars through boycotts – including contracts in Colombia and Jordan in recent weeks alone – and divestments, including that of the Gates Foundation’s $170 million stake in the company, after sustained international BDS campaigns highlighting G4S’ role in the incarceration, torture and oppression of Palestinians.
G4S reported a 40% fall in its pre-tax profits for a number of reasons, including a loss of contracts internationally. Its Israeli subsidiary employs 8,000 people and does $142 million in business annually.
In 2014, G4S announced that it would not renew its contract with the Israel Prison Service when it expires in 2017, following the loss of millions of dollars in business after a sustained international BDS campaign. That pledge came following previous pledges to “not renew” contracts at military checkpoints and West Bank Israeli occupation police stations.
But despite these pledges, G4S refused to pull out of the contracts and did not make formal written statements about ending its ties with Israel’s agencies of repression. In response, the international boycott movement targeting of G4S for its ongoing and active complicity with Israeli crimes has only escalated.
Today’s announcement is a clear victory for thousands around the world demanding G4S get out of occupied Palestine, for the Palestinian prisoners who urged a global boycott, and for the Palestinian people. It is a demonstration once again of the growing power of the BDS movement.
At the same time, just as with past G4S announcements, its complicity and responsibility for the imprisonment of Palestinians – including children – their torture in interrogation centers, the siege on Gaza, and the system of checkpoints that creates the matrix of colonial control continues.
Furthermore, G4S continues to be involved in human rights abuses not only in Palestine, but internationally. In the US, G4S is involved in detention and deportation at the US/Mexico border, as well as running privatized juvenile detention centers. Its privatized juvenile detention facilities in the UK, which it has also pledged to sell, have been exposed for abuse and neglect. G4S runs migrant detention centers in Canada, and provides security to the destructive Canadian tar sands and mining industries that are undermining communities and the environment on indigenous land, in North America and around the world.
In order to make sure that G4S’ pledges become reality, now is the time to escalate the global campaign to stop G4S: to demand the United Nations, European Commission, Canadian Air Transport Security Authority and other public agencies cancel their G4S contracts and build boycotts and divestments against this corporation profiteering from Palestinian misery.
Samidoun Palestinian Prisoner Solidarity Network